This inspiring picture book ideal for children ages 4 – 8 focuses on a bison that faces a terrible storm and helps his bison friends to be brave and learn to face the storm. It’s rollicking rhyme tells a fascinating story for kids that’s based on how real bison intentionally run straight through oncoming storms rather than turning and running away.

“Both Nate and I are committed to building brave kids and families intentionally; we are friends and fathers who love to collaborate on projects that inspire families,” said Luke Freshwater, who served as a former Army bomb squad leader in Afghanistan.  “We are thrilled that Zonderkidz caught the vision for this book: encouraging kids to be fearless and have the  courage to be leaders.”

Nate Davenport adds, “In this world of challenges, we all need a hero, and here is a lovable character we created that shows his entire bison herd that you can get through anything with a little bravery and self-confidence. Courage is a choice and it’s in all of us.”

“Richard Cowdrey, illustrator of the Zonderkidz Fiona the Hippo series of books, introduced us to Nate and Luke, and we were so taken with their message and with Richard’s early sketches of this brave bison. This book is a fun, humorous take on the way bison behave when faced with storms, but with a solid message about character and bravery that will resonate so well with children and their families, as well as with teachers and librarians,” says Megan Dobson, Vice President and Publisher of Zonderkidz.

“Their path through the storm seemed awful at best,

But Bryson the Brave was up to the test.

He carried them through – he went all the way,

And his story of courage is still told today!”

Nate Davenport resides in Huntington, West Virginia, whose city mascot is the bison! He and his wife have two children. Nate’s passion for literature and writing comes from his father who is also an author. He is a youth ministry graduate of Cedarville University in Ohio, where he first met co-author Luke Freshwater. He currently works as a sales leader in the medical space.

Luke Freshwater resides in the greater Columbus, Ohio area with his wife and five children. He is an aspiring bison farmer and is currently a sales leader. Luke served as a forest firefighter in Idaho and as an Army bomb squad leader in the war in Afghanistan. He went to NC State University and Cedarville, where he played baseball with his co-author Nate Davenport.

Richard Cowdrey is the New York Times bestselling author and illustrator of the beloved picture book series Fiona the Hippo, based on the world’s most famous hippo, Fiona of the Cincinnati Zoo. His favorite things to do are to draw and paint the things that reflect the awesomeness of creation. Richard’s fine attention to detail attracts fans to his books, like Legend of the Candy Cane; Bad Dog, Marley and all of the Fiona the Hippo picture books. He resides outside of Mt. Vernon, Ohio with his wife. 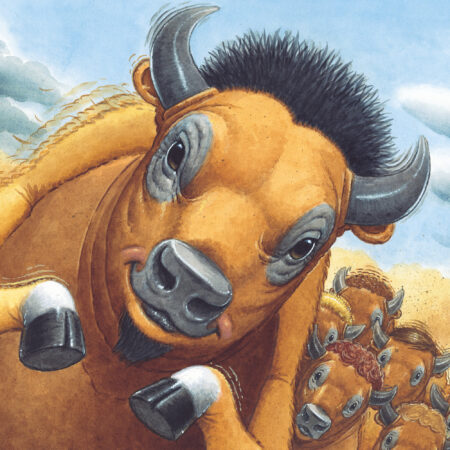 Bison the Brave Bison: Finding the Courage to Face the Storm